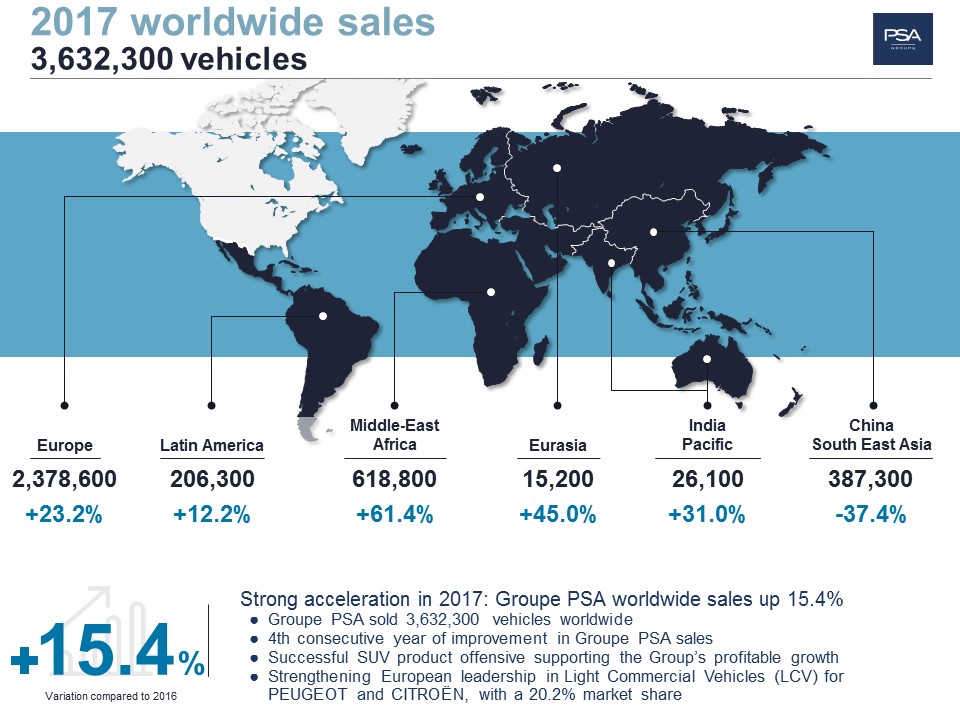 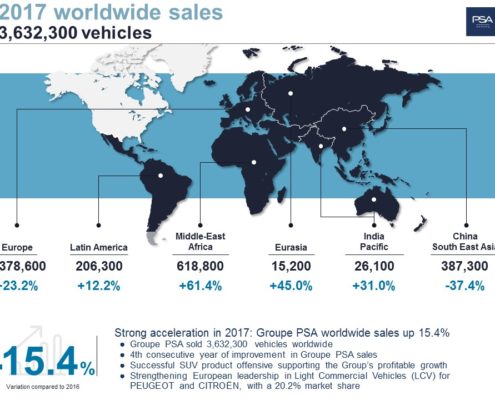 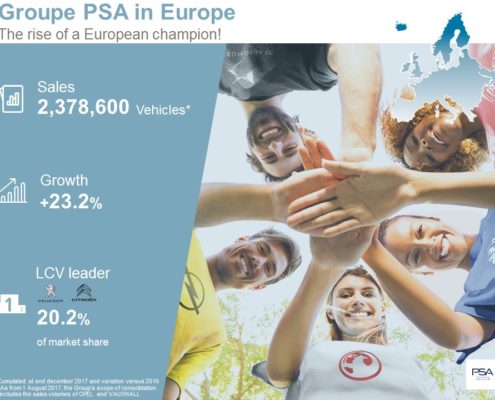 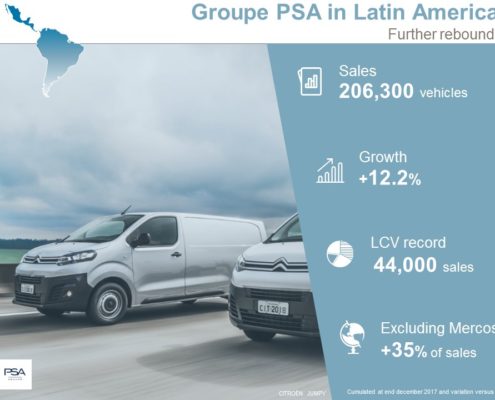 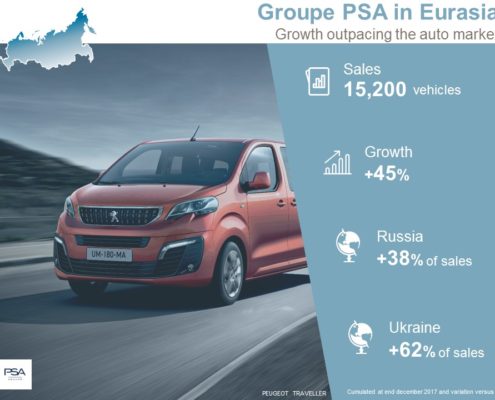 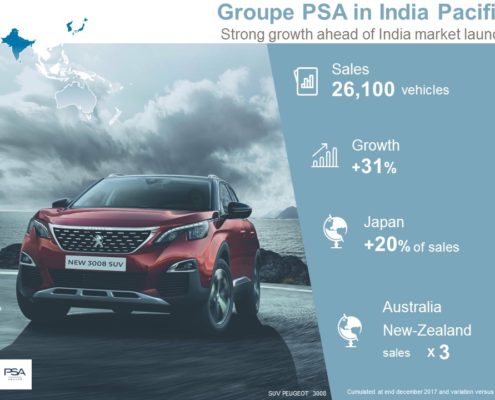 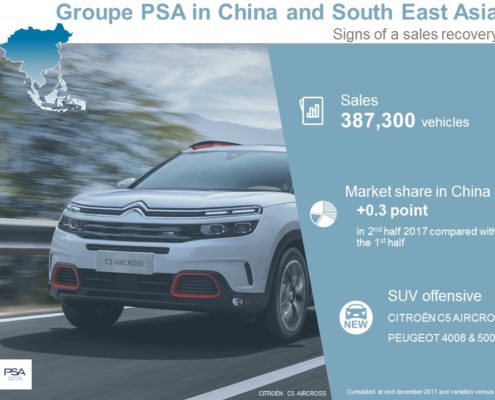 The Push to Pass plan’s SUV offensive accelerates and the five SUV models launched in the past 18 months have enjoyed growing success. Overall, SUV sales accounted for 23% of consolidated sales at the year-end.

PEUGEOT brand sold nearly 600,000 SUVs in 2017 worldwide and ranks 2nd in the SUV European market with a strong expansion of nearly 60%.

With 259,300 PEUGEOT 3008 SUVs sold globally in 2017, the PEUGEOT brand enjoyed sustained demand for the model, which was named Car of the Year 2017 in Europe and recognised by 38 additional awards worldwide. PEUGEOT also benefited from the success of the new PEUGEOT 5008 launched in March 2017, with 85,900 units sold, and the positive performance of the PEUGEOT 4008 in China, with 51,500 units.

At the end of February 2017, DS Automobiles debuted its first SUV, DS 7 CROSSBACK, and opened up online reservations for the La Première limited edition model. In October, the brand launched its exclusive network in parallel with order taking for all the line-up’sversions. The first deliveries are set for February 2018.

In 2017, OPEL and VAUXHALL rationalized the channel mix, in line with PACE! turnaround plan and led a record-breaking product offensive in 2017, with two new SUVs, the Crossland X and Grandland X, launched in May and September with sales of 33,900 and 18,700 units, respectively.

The PEUGEOT and CITROËN brands strengthened the Group’s leadership status in Europe, where it holds a market share of 20.2% in LCV (1.3 point market share gain) allowing the Group to capture more than 50% of European LCV market growth thanks to the new PEUGEOT Expert and CITROËN Jumpy.

Outside Europe, the Group’s LCV offensive also began to deliver results. In Eurasia, sales were up 55% before the start of local production of new PEUGEOT Expert and CITROËN

As from 1 August 2017, the Group’s scope of consolidation includes the sales volumes of OPEL and VAUXHALL, together representing 403,900 units sold between August and December.

Jumpy planned in the first half of 2018. In Latin America, sales increased 13% and a full range of renewed products and a complete range of services will be offered in 2018.

The rise of a European champion

Groupe PSA’s market share increased in all of the Group’s main host countries, excluding the

United Kingdom. For the first time since 2010, the Group added 0.3 points to its market share (11.1%) from PEUGEOT, CITROËN and DS sales alone.

On top of increased sales of SUVs and LCVs, the Group benefited from the successful launch of the PEUGEOT 308 (166,000 units sold), CITROËN C3 (217,000 units sold), and OPEL Insignia, available in three models, the Sports Tourer, Grand Sport and Country Tourer (total 40 600 units sold from August to December 2017).

In addition, the PEUGEOT 2008 and OPEL Mokka ended the year second and third, respectively, in their segment.

In the Middle East & Africa, profitable growth ahead of targets

This performance was driven by the Group’s development in Iran (444,600 units sold in 2017) and higher sales in Turkey, Israel and the French overseas departments. The Group’s overall market share in the region came in at 11.6% and has steadily risen since 2015, on target with the Push to Pass plan objective of selling 700,000 vehicles by 2021.

Groupe PSA has continued its product offensive in the region, where it has successfully launched the new CITROËN C3 (awarded the “Best Urbanite” title in Israel), the new PEUGEOT 3008 SUV (voted “Family Car of the Year” in South Africa and “Car of the Year” in Israel), and the new PEUGEOT Pick Up, which marks the brand’s history-making return to its legitimate place in the segment.

OPEL is in the midst of a product offensive in the region having recently launched the new Insignia and Crossland X and with the launch of the new Grandland X slated for early 2018.

For the DS brand, 2017 marked the development of a dealer network across the region ahead of the market launch of the DS 7 CROSSBACK in the coming months.

The year also saw the production start-up and market launch of the PEUGEOT 2008 SUV in Iran, and the creation of an Iranian joint venture between CITROËN and SAIPA based at the Kashan plant. The Group continued to expand its manufacturing base, breaking ground on the Kenitra plant in Morocco, starting up local production in Kenya and Ethiopia, and signing a memorandum of understanding to set up a new plant in Oran, Algeria.

Signs of a sales recovery in China & Southeast Asia

In a difficult economic environment, the Group sold 387,000 vehicles in the China & Southeast Asia region. Showing the first signs of a sales recovery, the Group has seen a rise in sales since July, and a market share gain of 0.3 points in second-half 2017 compared with the first half. The SUV line-up proved to be a triumph, with the successful launch in 2017 of the PEUGEOT 4008 and 5008, and the CITROËN C5 Aircross. It is worthy to note that sales volumes for the new PEUGEOT 308 and the CITROËN C5 and C6 were stable versus 2016, despite weaker demand in this market segment.

In Southeast Asia, Groupe PSA has been accelerating its development, particularly in Vietnam with the successful launch of the PEUGEOT 3008 and 5008 SUVs. The vehicles are now produced locally at THACO’s plant in Chu Lai, just nine months after a new assembly agreement was signed.

In June 2017, Groupe PSA signed an agreement to step up its cooperation with ChangAn Automobile, establishing a solid foundation for faster expansion of the DS brand. Presented at Auto Shanghai, the DS 7 CROSSBACK will be brought to market at the start of the Beijing Motor Show.

In Latin America, PEUGEOT sales rose 11.1% due to strong momentum in most of the region’s markets. The PEUGEOT 3008 and 5008 SUVs were launched very successfully in every country and sales have exceeded targets. The PEUGEOT Expert, recently launched in Brazil and Argentina and produced in Uruguay, also promises to be a success.

CITROËN’s sales were up 13,8% in most of the region’s markets. For example, sales in Chile jumped 47% thanks to the tremendous success of the new CITROËN C3 and the solid performance delivered in the LCV segment, with Berlingo leading the way. The CITROËN Jumpy, produced in Uruguay and marketed in Brazil and Argentina, has been well received, suggesting that demand for the vehicle will be strong in 2018.

DS Automobiles recorded sales growth of 21.6%, led by Argentina’s performance, where the brand ranks fourth in the premium automotive market thanks to the DS 3, the leading vehicle in its class for the fourth year in a row. The DS brand opened two DS Stores at the end of the year and is set to accelerate the expansion of the network in 2018. In the coming months, the brand will launch the DS 7 CROSSBACK.

In Japan, the Group grew by 20% and recorded its best performance in more than 20 years. A sales recovery is under way in Australia and New Zealand, where two new importers have been appointed, resulting in sales almost tripling compared to 2016. Sales for the French

Pacific overseas territories continued to rise sharply (up 40%) and South Korea’s performance was in line with that of 2016.

PEUGEOT contributed significantly to this growth, reporting a 37% increase in sales driven by the successful launch of the PEUGEOT 3008 and 5008.

CITROËN’s sales also rose sharply (up 36%) thanks to strong demand for the new C3.

DS continued to build its brand in the region. In Japan, the DS 7 CROSSBACK was warmly received at the Tokyo Motor Show. In addition, DS Automobiles opened three DS STORES and DS SALONS and will continue to develop its network in 2018.

Sales up 45% in Eurasia, outpacing the auto market

Sales of the new PEUGEOT 3008 SUV were significantly ahead of the previous generation’s performance, accounting for 21% of the brand’s volumes, and helping to drive its volumes up 50.7%. The momentum in sales for CITROËN’s Grand C4 Picasso (up 126%), particularly in the BtoB segment, also pushed up the brand’s sales, by a strong 33.4% in Eurasia.

Groupe PSA’s LCV segment sales rose 55%. Local production of the PEUGEOT Expert, CITROËN Jumpy, PEUGEOT Traveller and CITROËN SpaceTourer in Kaluga, Russia as from 2018 is expected to enable the Group to achieve even faster sales growth in Eurasia.

Jean-Philippe Imparato, Chief Executive Officer, PEUGEOT, said: “2017 was an exceptional year, with record high results for PEUGEOT. We beat our target of selling two million vehicles, largely due to strong demand for our SUV and light commercial vehicle line- ups, on top of solid performances from our conventional PEUGEOT 208 sedan models and the new 308. The brand increased volumes sold as well as market share in five out of six regions. PEUGEOT has successfully moved upmarket and is continuing to expand internationally with sales outside Europe now representing 45% of the worldwide total.”

Jumpy and the SpaceTourer, but also the year we launched the C3 Aircross SUV in Europe and the C5 AIRCROSS SUV in China. The result was that, in Europe, we achieved our highest level of sales in six years and won back market share in both passenger cars and light commercial vehicles. Excluding China, our worldwide sales rose 7.5%! We have the necessary strengths to sustain and intensify this sales momentum in 2018, thanks to the global roll-out of our most recent launches, but also to major upcoming launches. Visit the Geneva Motor Show to find out more!”

Yves Bonnefont, Chief Executive Officer, DS Automobiles, said: “2017 was a crucial milestone in the development of the DS brand, with the opening of orders for the DS 7 CROSSBACK, the first DS of second generation, the debut of the DS exclusive network and the deployment of ‘Only You’. We are delivering on our global strategic roadmap.”

Peter Küspert, Executive Vice-President, Sales, Marketing & Aftersales at OPEL/VAUXHALL, said: “2017 was a transitional year for OPEL/VAUXHALL involving an unprecedented product offensive that will allow us to offer a young line-up over the full 2018 year and be present in all major segments, in particular with the X family of vehicles, which includes the Mokka X, Crossland X and Grandland X, on top of the Insignia GSi, Corsa GSi and the brand new Combo.”

For more information, see the press kit, illustrations and videos at: http://media.groupe-psa.com/en/strong-acceleration-2017-groupe-psa-worldwide-sales#prettyPhoto

With sales and revenue of €54 billion in 2016, the Groupe PSA designs unique automotive experiences and delivers mobility solutions that provide freedom and enjoyment to customers around the world. The Group has three car brands, Peugeot, Citroën and DS, as well as a wide array of mobility and smart services under its Free2Move brand, to meet the evolving needs and expectations of automobile users. The automobile manufacturer PSA is the European leader in terms of CO2 emissions, with average emissions of 102.4 grams per kilometre in 2016, and an early innovator in the field of autonomous and connected cars, with 2.3 million such vehicles worldwide. It is also involved in financing activities through Banque PSA Finance and in automotive equipment via Faurecia. Find out more at groupe-psa.com/en. Media library: https://medialibrary.groupe-psa.com/ / Twitter: @GroupePSA