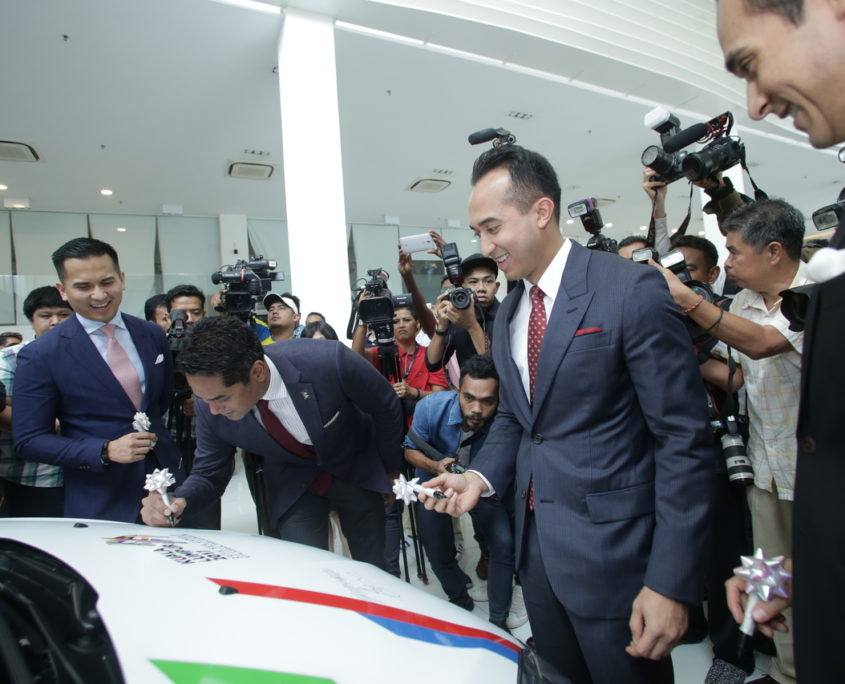 SHAH ALAM, 25 May 2017 – Nasim Sdn Bhd, a member of the Naza Corporation Holdings and the official distributor of Peugeot vehicles in Malaysia together with Naza Corporation Holdings today signaled their ambitions to become a major driving force behind the Kuala Lumpur 2017 by providing a record 298 fleet cars of the Peugeot 408, 508 and the Traveller range at the fleet handover ceremony at the Peugeot showroom in Glenmarie, Shah Alam.

The ceremony paved the way for the premium range vehicles to become the Official Car for the Kuala Lumpur 2017 games that will be hosted in Kuala Lumpur over August and September this year.

“It is an honour for Naza to be part of this spectacle, and we hope that these 298 cars would deliver prestige, quality and a spectacular driving and passenger experience for all at the KL2017,” said SM Nasarudin Tan Sri SM Nasimuddin, Group Executive Chairman/Group CEO, Naza Corporation Holdings Sdn Bhd.

“Naza’s theme of Driving Champions (#DrivingChampions) signifies our proud efforts to be part of the nation’s history and ambition to be champions of both the 29th SEA Games and the 9th Para Games.”

“The last time Malaysia hosted the Games in Kuala Lumpur was in 2001 where we were crowned overall champions and it is our hope that our massive contingent can emulate that same feat after a long hiatus,” added SM Nasarudin.

“We are proud to have Naza and Peugeot as a Platinum Sponsor of the KL 2017. Peugeot is an established premium automotive brand that has been supporting various sporting events across the world and we are proud to have them as part of this remarkable journey,” said Khairy.

Besides the official cars that are to be used for KL2017, Peugeot also launched the pledge car which is the Peugeot 208 — that will be used as vehicles to unify the nation in support of our Malaysian athletes at the KL2017.

Datuk Samson Anand George, Group COO, Automotive Group, Naza Corporation Holdings Sdn Bhd. was thrilled with the launch of the pledge car and the message of support and unity that it carries.

“The Naza and Peugeot Pledge Car are a call to the nation to come forward and BangkitBersama to show their support by signing messages of support to our athletes as a collective nation. This car will be touring the country and will be parked at specific locations nationwide to gather the support of Malaysians,” said Datuk Samson.

“The messages on this pledge car will later  be displayed to the athletes, which will surely ignite their passion and drive to give their best for Malaysia.” he added.

Naza/ Peugeot are also  offering 100 free tickets for 50 lucky winners to watch the glittering opening ceremony of the KL 2017 live, at the National Stadium in BukitJalil on August 19.

In order to be in contention for the tickets, all fans have to do is take a picture with the pledge car with a message or caption and include #PeugeotMalaysia, #DrivingChampions and #NazaCorp when they post on social media.