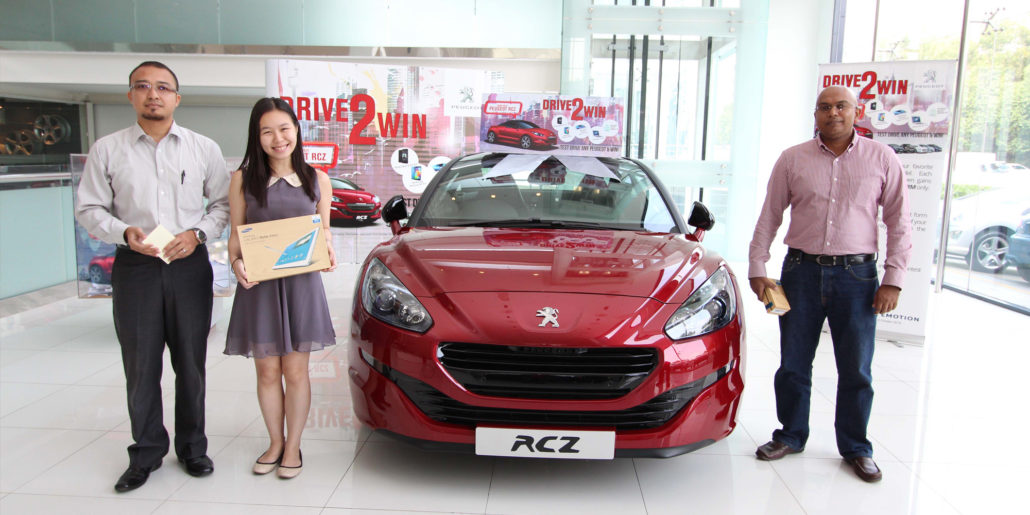 Nasim Sdn Bhd, the official distributor of Peugeot Automobiles, has awarded the first set of prizes for their ‘Drive 2 Win’ contest to their Series 1 winners.

“I took the 208 out for a test-drive before Merdeka and was so impressed by it that I bought it on the spot. The salesperson recommended I fill out the contest form so I did. I have never won anything in a contest before so it was a wonderful surprise,” said Germaine, the first place contest winner of a Samsung Galaxy Note 12.2. “The 208 is very stylish and has a lovely continental feel to it. It is very easy to drive too. I had never driven a Peugeot before so it made a great first impression.”

Jeyaseelan had a similar experience. “Having been a Peugeot fan for the past 15 years and owning a few classic Peugeots, I took the 208 out for a test-drive and liked it so much that I bought it for my wife. While I am thrilled to win the Samsung Galaxy S5, I will be back for the RCZ,” he joked.

“Because my family is expanding, I have been looking into buying a suitable family car. That is why I test-drove the 508 which has emerged as a top contender for me. I currently own the 308 Turbo so Peugeot was my first choice for a second car,” said Mohd Heikal, who won shopping vouchers worth RM500.

The three winners will still be in the running to win the grand prize, a stunning and powerful Peugeot RCZ in Rouge Red worth RM248,888.

“I want to give my heartiest congratulations to the Series 1 winners and I wish you all the best of luck in being one step closer to winning the Peugeot RCZ in Rouge Red. I also want to encourage everyone else to keep the entries coming in,” said Dato’ Samson Anand George, Chief Operating Officer of Nasim Sdn Bhd.

“We have gotten great and very encouraging responses for this campaign because of its exciting prizes,” he added. “The grand prize is an especially enticing incentive.”

To enter the ‘Drive 2 Win’ contest, just visit any Peugeot showroom nationwide and test-drive any of the award winning Peugeot’s models. Upon completion of the test-drive, simply fill up the contest entry form and deposit it into the contest box displayed in the showroom.

One test-drive entitles one entry. However, if a customer registers a new Peugeot, they will be entitled to five entry forms which will give them more chances of winning.

The contest is broken into six series. The duration of each series is two weeks. There will be three winners for each series, resulting in eighteen winners. With the first series over, there are still five series left to win.

The bi-weekly series winners will be rewarded with the latest gadgets and exciting prizes such as the Sony Xperia Z2, Samsung Galaxy S5, Samsung Galaxy Note 12.2, Macbook Air and shopping vouchers worth RM500.

Peugeot Cruisers are still stopping by local hotspots on selected dates to hand out fun freebies. These hotspots include Taman Tun Dr Ismail, Ara Damansara, Desa Park City, Setia Alam, Subang Jaya, PJ State and Jaya One with more to come. Outside the Klang Valley, the Peugeot Cruisers will drop by Queensbay Mall in Johor Bahru, Penang Road Chowrasta in Georgetown and Feringghi in Penang this weekend. Visit the Peugeot Malaysia website and Peugeot Malaysia Facebook for more information on dates and next venues.

Complementing the ‘Drive 2 Win’ contest is the big comeback of #peugeotselfie. For the second time this year, stand a chance to win two GoPro cameras, a Samsung smartphone, or a Canon digital camera. Snap a photo of yourself with any Peugeot vehicle. Complete the form on Peugeot Malaysia’s Facebook contest tab and submit the photo with a catchy caption.

The submission period for #peugeotselfie is from now until October 31, 2014.