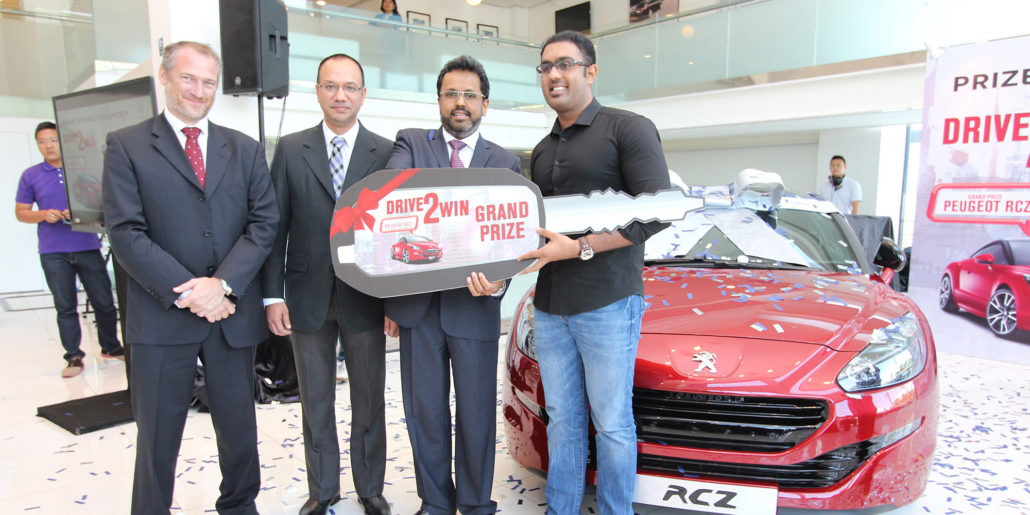 After 11 weeks and six series, Nasim Sdn Bhd, the official distributor of Peugeot automobiles, today awarded the grand prize of Peugeot “Drive 2 Win” along with prizes for the Series 6 winners.

â€œThe campaign has helped increase awareness of Peugeot’s award-winning models as well as convert any possible fence-sitters who have not considered purchasing a Peugeot. Once they test-drove a Peugeot, there was no turning back which led to a number of successful bookings,â€ said Datoâ€™ Samson Anand George, Chief Operating Officer of Nasim Sdn Bhd.

He said the campaign boosted overall test-drives by 30% and drew crowds to Peugeot outlets nationwide to test-drive the diverse Peugeot models.

â€œI want to offer my heartiest congratulations to the grand prize winner of the coveted 200bhp Peugeot RCZ as well as all the bi-weekly Series winners and the #peugeotselfie winners’ he said.

To enter the “Drive 2 Win” contest, these were the steps:

One test-drive entitled to one entry form only. However, if a customer registered a new Peugeot, they were entitled to five entry forms which gave them more chances of winning.

In conjunction with the “Drive 2 Win” grand prize ceremony, Nasim also awarded the winners of the #peugeotselfie contest. Participants had to complete the form on Peugeot Malaysia’s Facebook contest tab then submit a creative photo of themselves together with any Peugeot vehicle with a catchy caption. Nasim received over 200 submissions for #peugeotselfie.