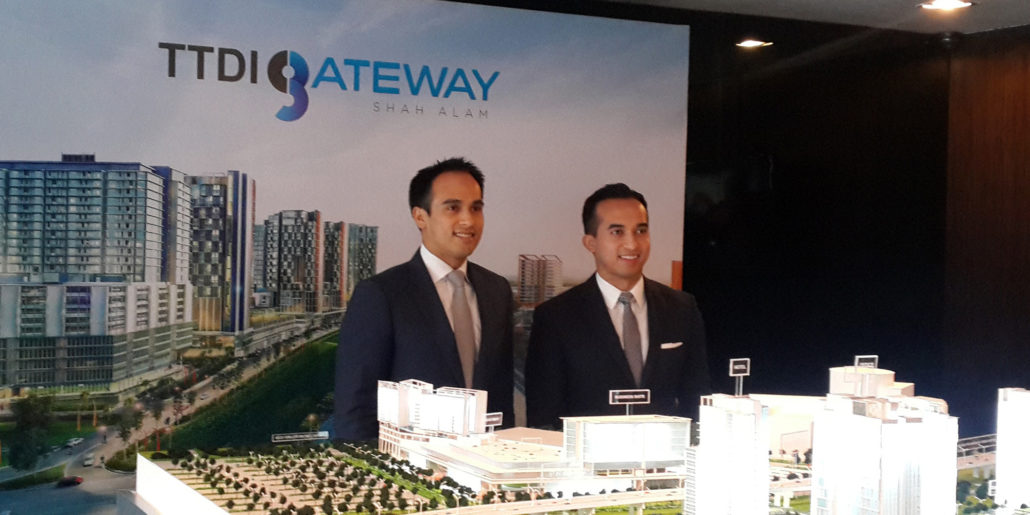 Naza TTDI Sdn Bhd unveils the master plan development of TTDI Gateway, a landmark business lifestyle hub in Section 13, Shah Alam, Selangor. The 38.8 acre integrated development that will be developed over three phases will comprise of offices, serviced apartments and retail components. The entire project is expected to generate a Gross Development Value of RM2.5 billion and is targeted to be completed by 2020.

During the announcement, SM Faliq SM Nasimuddin, Deputy Executive Chairman and Group Managing Director of Naza TTDI said, “TTDI Gateway’s strategic location at the main entry point to Shah Alam city centre was planned to transform the city to be a more vibrant lifestyle hub which will be a key business and retail destination in the Klang Valley.” He added that the development was planned in line with the City’s goal to create a clean, beautiful, vibrant and safe city, with all these elements incorporated in the master plan. Also present was Naza TTDI’s Chairman, SM Nasarudin SM Nasimuddin.

The integrated development was conceptualised along three key propositions: Vibrancy, Visibility and Value. Sited a stone throw away from sports and recreation attractions such as the Shah Alam Stadium, Malawati Indoor Stadium and Sultan Abdul Aziz Shah Golf Club, the vibrance of Section 13 is expected to be further enhanced at TTDI Gateway with its planned contemporary development components.

Furthermore, the development is primely Visible from major highways. Among them are North South Expressway Central Link (ELITE), Guthrie Corridor Expressway, Federal Highway and New Klang Valley Expressway (NKVE). For other accessibility, public transportation includes the KTM Komuter station at Batu Tiga as well as the proposed extension of the LRT3 line extending from Kelana Jaya.

Another proposition TTDI Gateway has to offer is its Value. Catering to the needs of its dwellers, the development will be a one-stop centre – residences, offices and retail components. There will be three major retail components featuring an existing hypermarket, a home improvement store and a retail mall that will position TTDI Gateway as one of the shopping attractions in the Klang Valley.

Its layout and building features will not only provide a safe environment in terms of hindering crime but will also have green features for healthy living. The components will be designed according to international architectural setting to attract diverse visitors locally and internationally. It is also sandwiched between matured neighbouring estates such as Subang Jaya, greater Shah Alam, Klang, Setia Alam, Glenmarie, Sunway, Ara Damansara and Kelana Jaya.

As a self-contained development, a vast array of existing amenities are already available, to further strengthen TTDI Gateway’s capital appreciation. Among them are primary and secondary schools, nearby colleges, universities and a medical centre namely Darul Ehsan Medical Centre in Shah Alam.