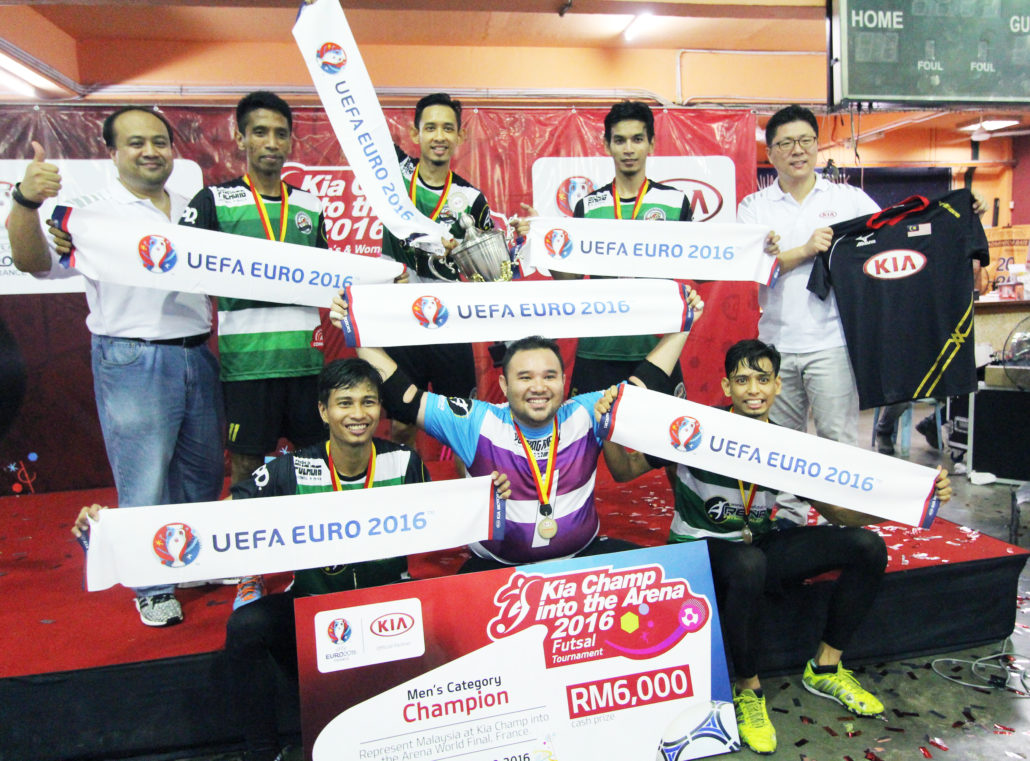 KUALA LUMPUR April 24, 2016–Kia Champ into the Arena, a futsal tournament by Naza Kia Malaysia ended in a well-earned victory today with the announcement of the winning team after a competitive day of playing amongst 64 teams.

The champion team, Puchong Fuerza A comprising six players will represent Malaysia at the Kia Champ Into The Arena tournament in Bordeaux, Franceon 1 July, 2016. In addition to the all-expenses paid trip to France, the whole team will get RM6,000 in cash, a championship cup, champion medals and tickets to the Quarter Finals of EURO 2016.

Kia Champ into the Arena is a global initiative by Kia Motors Corporation for Malaysians to experience and be a part of the excitement of EURO 2016, one of the biggest sports events of the year.

Naza Kia Malaysia gave away RM19,000 total in cash in addition to the six flight tickets to France to the winners today. The Men’s Open consisted of 63 teams while 24 teams competed in the Women’s Open.

“Malaysians’ love of Futsal and football is undeniable. These sports unite Malaysians and inspire passion, dexterity and determination. With Kia Champ into the Arena, these qualities are masterfully showcased and stands to reason why the winning team deserves a place to compete at the Futsal tournament to be held in conjunction with EURO 2016 in France,” said Dato’ Samson Anand George, Group Chief Operating Officer, Automotive Group, Naza Corporation Holdings.

“We are pleased to be able to have Malaysia represented in France at the global futsal tournament through our champions today. Possessing ‘The Power to Surprise’ will serve you well when competing against European players,” added Dato’ Samson.

Kia Champ Into the Arena was open to 87 teams via online registration starting early March 2016. Registered teams started the matches on Sunday, 24 April 2016 at Sports Planet in Ampang. The format of the tournament was on a group stage with 21 groups of 3 teams. The top two teams moved on to the knock-out stage. All the games were played 7+7 minutes with a 5 minutefoul limit each half. During knock-out, in the event of a draw, an additional 1:30 seconds were played on a golden gold basis, followed by penalty kicks.

Besides Kia Champ Into the Arena, Naza Kia Malaysia is also givingone lucky Malaysian the opportunity to win an all-expenses-paid trip to France to watch the Opening Match at EURO 2016. Customers that test drive any Kia model will receive a lucky draw coupon and automatically be entered into the contest. The winners will be announced in May, 2016.