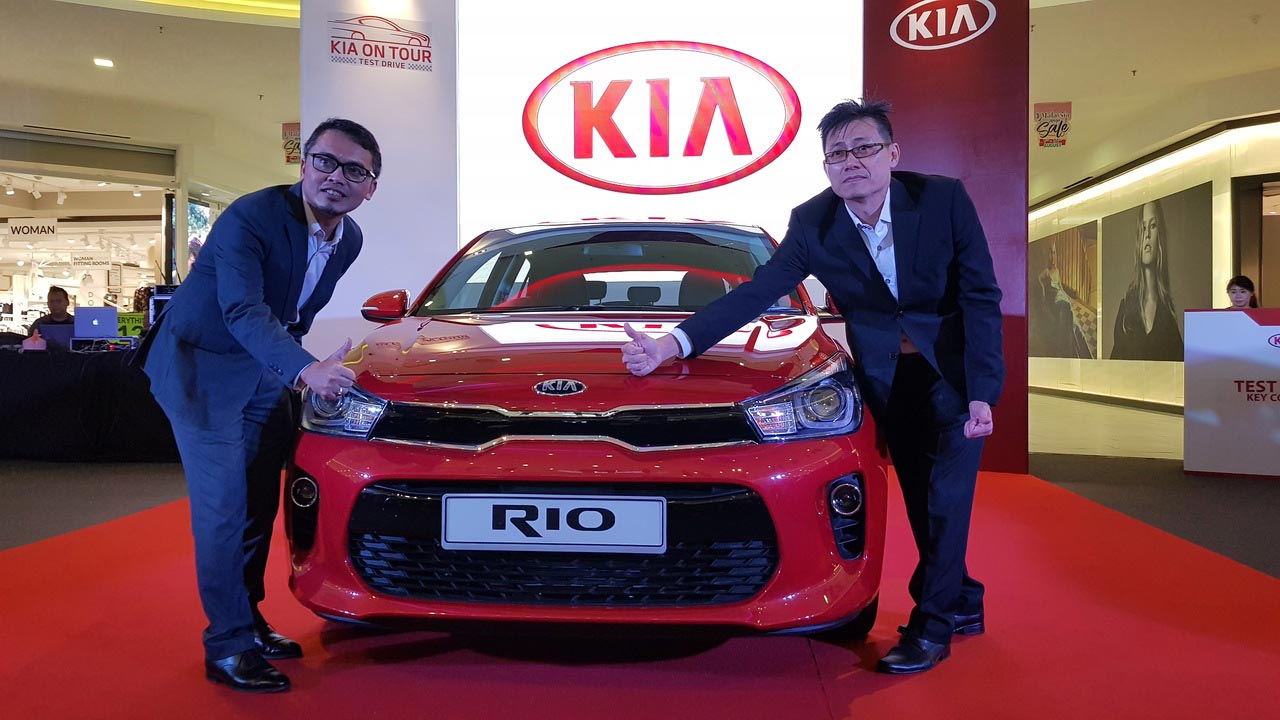 Kuching, August 18, 2017 – Continuing its momentum into 2017, Naza Kia Malaysia, the official distributor of KIA vehicles in the country, today introduced the All-New Kia Rio in East Malaysia, starting with Kuching, Sarawak. Emanating the KIA brand identity, the All-New Kia Rio is the fourth generation of the globally popular range and also making an appearance at launch are Kia’s highly sought-after SUVs, the New Sorento HS Turbo Diesel and the New Sportage GT Turbo Diesel, which were first introduced to the local market in April.

The All-New Kia Rio has been given global recognition for its modern, stylish and robust yet premium appearance over its predecessors. The completely restyled design of the All-New Kia Rio a fun and practical hatchback for city dwellers. Its innovative, sleek and aerodynamic design aims to be a crowd pleaser.

Speaking at the launch of the All-New Kia Rio, Nazman S. H. C. Yusof, Head of Company, Naza Kia Malaysia Sdn Bhd said, “Though the third-generation Kia Rio was popular among Malaysians with its design, good build quality and interior features, the All-New fourth-generation Kia Rio is set to build on those strengths, and take it up a notch further by combining said features with improved spaciousness, which gives it a dash of practicality on top of its good looks. The All-New Kia Rio offers customers a balanced product that combines everyday practicality together with a grand design and efficiency,” he added.

Nazman further commented, “For East Malaysia, the Kia models in the local market has grown year-on-year. Seeing this increasing demand especially for SUVs in East Malaysia, we made the bold decision to make Kuching a springboard for other models to further strengthen Kia’s position here.”

“The acceptance of the Kia models in East Malaysia has been accelerating since we made our presence here in Kuching more than 15 years ago. We are happy to see a positive market response and hope that this will increase our presence in Kuching,” he added.

The new bold dynamic design of the All-New Kia Rio begins from the front with the redesigned lower bumper and the sleek integration of the headlamps and the trademark ‘Schreyer’ tiger-nose grille. The design language of the All-New Rio speaks sculptured by the wind instead of penned in the studio with a solid body volume and slim side glass giving it a wide, tout appearance. At the rear, the unique tail lights are immediately distinguishable as a Rio while the tailgate handle also doubles as the housing for the rear-view camera.

The interior of the All-New stylish and agile Kia Rio has been extensively redesigned with the layout of the dashboard, giving the car with a sportier, more driver-focused design and a more premium character. The arch-shaped dashboard, sculpted in three dimensional geometric curvature, emphasizes a spacious and airy interior. The centre of the dashboard comes fitted with a floating-type audio system with 5-inch LCD touchscreen and Bluetooth connectivity, emphasising the latest technology in a trendy modern styling.

The interior further boasts practicality with its fully automatic air-conditioning, and its 60:40 folding rear seats that provide even more storage space than before. It also comes with other conveniences which the market has come to appreciate in a car of this segment such as keyless entry, push start button, powered windows, and automatic headlights with static bending lights and even LED daytime running lights.

Apart from the All-New Kia Rio, Naza Kia Malaysia once again pushed the envelope of diesel vehicles locally with the introduction of the New Sorento HS Turbo Diesel and New Sportage GT Turbo Diesel in East Malaysia, only a few months after its initial launch in April.

The diesel-powered variants of the Kia Sorento and Kia Sportage are powered by the 2.2 CRDi (Common Rail Direct Injection) and 2.0 AWD GT CRDi engines that deliver 440Nm and 400Nm of torque accordingly. The improved fuel efficiency for both models can result in traveling close to 1,000km on a full tank.

“We are convinced with the advanced automotive technologies and upgraded top range features of these two new variants of the Kia Sorento and Sportage will provide customers even greater ownership value and satisfaction. The new award winning models are highly-developed with a premium level interior, an award-winning exterior design, riding comfort, excellent fuel economy with a more efficient choice of engines and of course good overall performance being “class above” competitors,” said Nazman.

Commenting on the encouraging growth of Kia models in East Malaysia, he added, “For East Malaysia, the Kia models in the local market has grown year-on-year. Seeing this increasing demand especially for SUVs in East Malaysia, we made the bold decision to make Kuching a springboard for other models to further strengthen Kia’s position here. We are aware that East Malaysia is a growing market with strong potential. Given its wide and rugged terrain, this is a good opportunity for Kia’s SUVs to be in the East Malaysia market as the SUVs not only handle these types of roads well, but make the journey comfortable and safe. Additionally, diesel is  fuel-efficient and gives value-for-money to consumers. This is where the New Sorento HS Turbo Diesel and the New Sportage GT Turbo Diesel fit the bill perfectly.”

In conjunction with the 60th Merdeka celebrations around the corner, Naza Kia Malaysia has prepared a special Merdeka Sale throughout the month of August for the KIA Sportage GT and KIA Cerato 1.6 SX models, complete with added privileges. Every purchase of either the KIA Sportage GT (at RM126,388) or KIA Cerato 1.6 SX (at RM88,888) during this Merdeka month will come with these privileges:

These Merdeka deals are available for a limited time only and valid at all Naza Kia showrooms nationwide from now until 31st August 2017, while stocks last.