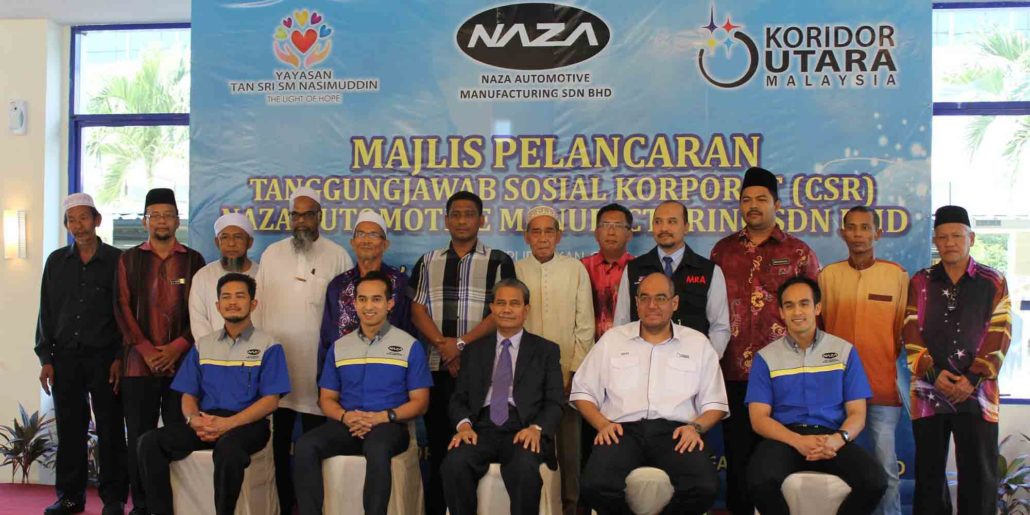 Naza Group Of Companies Contributes RM400,000 To School And Less Fortunate In Kedah

At the launch of its corporate social responsibility programme held today at Naza Automotive Manufacturing (NAM) in Gurun Kedah, Naza Group of Companies’ Joint Group Executive Chairman, SM Nasaruddin SM Nasimuddin said, “The contributionaims to elevate locals in the northern region especially those from Kedah in the areas of education, religion, health, disaster relief and poverty.”

A total of 32 recipients consisting of schools, orphanages, community centres, single mothers, victims of natural disasters and the poor received assistance in cash and in kind for the development of community infrastructure, mosque, surau, renovation of homes, education sponsorships and vans.

Recently formed in honour of the founder of Naza Group of Companies, the foundation is spearheaded by the wife of the late Tan Sri, Puan Sri Datin Seri Utama Zaleha Ismail together with a Board of Trustees consisting of family members and staff from the conglomerate.
Prior to the setting-up of the foundation, the CSR activities of the group were conducted via the respective companies within the Naza Group. With the formation of the Yayasan Tan Sri SM Nasimuddin, all projects and activities will now be under the foundation.

Some of the previous CSR contributions done in previous years were the funding of the building and maintenance of the nation’s first green mosque in Section 13, Shah Alam Selangor worth RM12 million. RM100,000 was also donated to the victims of the landslide in Ulu Langat.

In 2010, a portion from the sale of every Peugeot sold from July to September 2010 was donated to Hospis Malaysia. It summed up to a total of RM200,000 worth of contributions. A year later on the same cause, a Peugeot 207 was given to the Assunta Palliative Care Centre (AsPaCC) for the organisation’s use.

Donations worth more than RM60,000 were contributed for two years in 2012 and 2013 to the United Nations World Food Program which feeds families and children who are hunger stricken in the Asia Pacific region. Locally, charitable homes in Malaysia were also recipients of the foundation. A donation amounting to RM162,500 was distributed last year during the holy month of Ramadhan.

In March 2014, the Naza Group of Companies contributed RM250,000 to the Kedah Football Association in a one-off sponsorship.