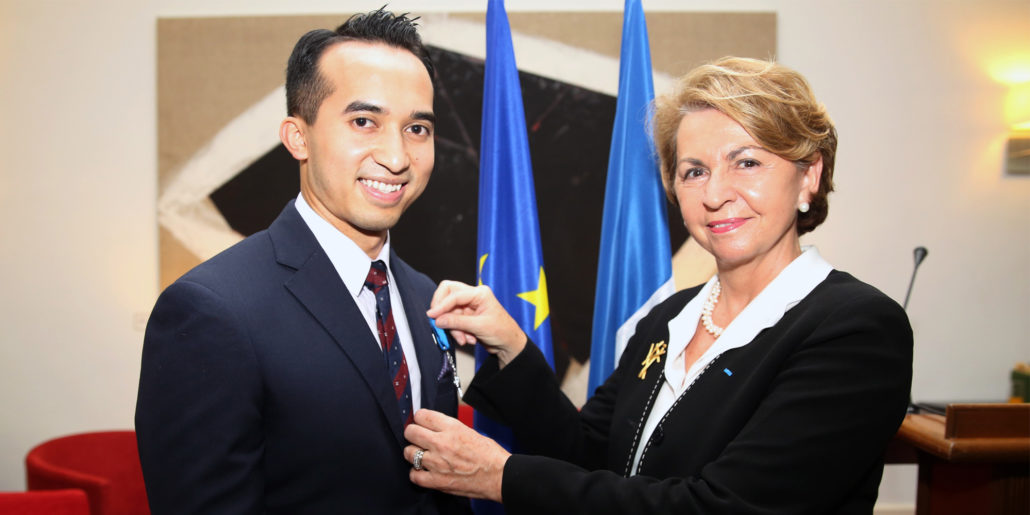 SM Nasarudin SM Nasimuddin, Joint Group Executive Chairman of the Naza Group of Companies and Chairman of the Malaysian French Chamber of Commerce & Industry (MFCCI) was recently conferred the Chevalier de l’Orde National du Mérite award by the French government, signifying his contributions towards the French community especially through the automotive industry.

The Ambassador of France to Malaysia, Martine Dorance conferred the distinguished award to SM Nasarudin in a ceremony held at the Residence of France in Kuala Lumpur. In her speech to the latter, Her Excellency said, “Over the last six years, this partnership (between the Naza Group and PSA Peugeot Citroen) has been led by your outstanding dynamism, enthusiasm and efficiency. You made possible the very rapid development of the Peugeot brand in the Malaysian market.”

“In addition to your post at the head of the Naza Group, you directly contribute to the excellent relations between our two countries as Chairman, since June 2009, of the Malaysian French Chamber of Commerce and Industry. As we all know, MFCCI represents over 250 member companies from various sectors, forming a dynamic and powerful business network.”

On SM Nasarudin being the youngest recipient of the distinguished award, she noted, “The high quality of your work and commitment has convinced the French authorities to make an exception to the common rule of minimum age.”

Created by decree in 1963 by President Charles de Gaulle, the Chevalier de l’Orde National du Mérite (Knight of the National Order of Merit) is awarded by the President of the French Republic and seeks to reward distinguished civil or military achievements. It is one of the two most prestigious Order in France.

“I am truly humbled and honoured to be conferred the Chevalier de l’Ordre National du Mérite, a recognition by the government of the French Republic,” said SM Nasarudin. “Today, I am proud to note that through the Naza Group, France is a strong contender in the automotive sector commanding 20% of European automotive market share in Malaysia.”

“The Naza Group of Companies is a diversified company and as the Joint Group Executive Chairman of the Naza Group of companies, I look forward to enhancing business opportunities with French companies.”

As a result of the Naza Group’s success with the Peugeot marque, the Group via its subsidiary Naza Euro Motors Sdn Bhd was appointed the official distributor of the Citroen brand in Malaysia besides operating the Citroen distribution in Brunei.