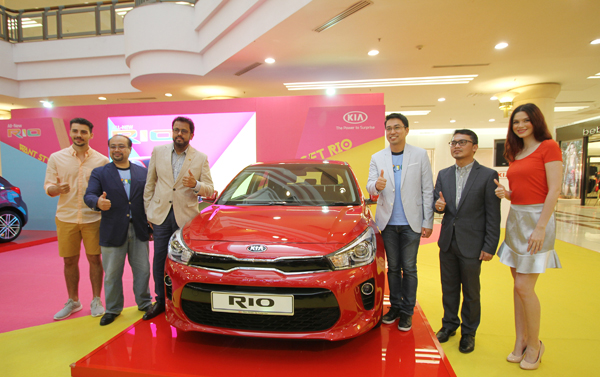 Kuala Lumpur, July 20, 2017 – Continuing its momentum into 2017, Naza Kia Malaysia, the official distributor of Kia vehicles in the country, today took the wraps off the fourth-generation Kia Rio at One Utama Shopping Centre. The All-New Kia Rio has been given global recognition for its modern, stylish and robust yet premium appearance over its predecessors.

The completely restyled design of the All-New Kia Rio a fun and practical hatchback for city dwellers. Its innovative, sleek and aerodynamic design aims to be a crowd pleaser.

Speaking at the launch of the All-New Kia Rio, Dato’ Samson Anand George, Group CEO, Automotive Group, Naza Corporation Holdings Sdn Bhd said, “Though the third-generation Kia Rio was popular among Malaysians with its design, good build quality and interior features, the All-New fourth-generation Kia Rio is set to build on those strengths, and take it up a notch further by combining said features with improved spaciousness, which gives it a dash of practicality on top of its good looks.”

“The All-New Kia Rio offers customers a balanced product that combines everyday practicality together with a grand design and efficiency,” he added.

The new bold dynamic design begins from the front with the redesigned lower bumper and the sleek integration of the headlamps and the trademark ‘Schreyer’ tiger-nose grille. The design language of the All-New Rio speaks sculptured by the wind instead of penned in the studio with a solid body volume and slim side glass giving it a wide, tout appearance. At the rear, the unique tail lights are immediately distinguishable as a Rio while the tailgate handle also doubles as the housing for the rear-view camera.

Dato’ Samson further commented, “Where previously the Kia Rio was a car for the young, the bold and premium styling of the All-New fourth-generation Rio will attract an even wider audience. The interior is bigger and a wider boot space than the others before. Combined with the collapsible rear seats give the All-New Kia Rio amazing practicality which the previous generation Rio was not able to offer.”

In this regard, the All-New Kia Rio will inspire you to “Find Your Groove”, as the sporty hatchback presents the groove that you have never seen before.

The increase in space also adds to the versatility of the All-New Kia Rio as the tailgate is now wider by 71mm and lowered to the ground by 26mm this allows owners to store wider, bulkier items than ever before.

Kia has also added a fixed quarter glass and reduced with width of the C pillar, and the rear glass area has also been widened. This allows more light inside the cabin, giving the impression of spaciousness.

The interior of the All-New stylish and agile Kia Rio has been extensively redesigned with the layout of the dashboard, giving the car with a sportier, more driver-focused design and a more premium character.

The arch-shaped dashboard, sculpted in three dimensional geometric curvature, emphasizes a spacious and airy interior. The centre of the dashboard comes fitted with a floating-type audio system with 5-inch LCD touchscreen and Bluetooth connectivity, emphasising the latest technology in a trendy modern styling.

The interior of the All-New Kia Rio boasts practicality with its fully automatic air-conditioning, and its 60:40 folding rear seats that provide even more storage space than before. It also comes with other conveniences which the market has come to appreciate in a car of this segment such as keyless entry, push start button, powered windows, and automatic headlights with static bending lights and even LED daytime running lights.

The fourth generation Kia Rio has also received positive praises from the global press, with some saying, “…the Kia Rio is a reflection of the maturation of a brand that has become a global player,” including an Australian media also said “the South Korean-built Rio offers an interior package that is both more sophisticated and better equipped than the car that it replaces.”

On a global standpoint, the Kia brand also gained recognition for the impeccable standard of quality of its products, having ranked highest in JD Power’s Initial Quality Study (IQS) for two consecutive years in one of the auto industry’s most closely-watched quality surveys.

Now available in the Malaysian market for RM79,888 on the road without insurance, in four different colours such as Clear White, Signal Red, Smoke Blue and Silky Silver. The All-New Kia Rio will be available in showrooms nationwide.