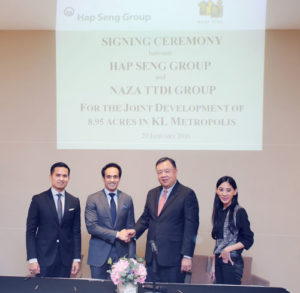 The joint development will have a potential Gross Development Value of RM3.8 billion

Under the development rights agreement, Golden Suncity Sdn Bhd will be granted exclusive right to develop 8.95 acres of land within the KL Metropolis masterplan. This includes the right to design, develop, build and complete a proposed mixed commercial development on the land.

“This partnership not only represents an opportunity for Hap Seng Group to reinforce its prominent presence in the property development market sector in the Klang valley, it also formalises the strategic alliance between two established conglomerates and catalyses the transformation of the KL Metropolis masterplan,” said Datuk Edward Lee.

“Being part of this iconic development will certainly help elevate Hap Seng Group’s brand name and consolidate our property arm towards becoming a premier property developer in Malaysia,” he added.

“This joint venture reflects Naza TTDI’s commitment to accelerate the transformation and reshaping of the country’s Meetings, Incentives, Conventions and Exhibitions (MICE) industry by inviting development partners in building complementing components to position Malaysia as the premier MICE destination in the region,” said SM Faliq.

“It is our hope that with Hap Seng Land’s participation, it will contribute significantly towards turning KL Metropolis into a sustainable development that incorporates the principles of smart growth, urbanism and green building,” he added.

The development is expected to draw enormous interest as this is one of the last prime acreage in the Klang Valley. The land is also strategically located in an up market area with close vicinity to prime established residential and commercial centres such as Mont Kiara, Publika, Damansara Heights and Bangsar. The site is accessible via Jalan Kuching and Jalan Tuanku Abdul Halim which connects to the KL City Centre and KL Sentral. KL Metropolis could be a natural extension from these centres which are considered among the most affluent in Kuala Lumpur.