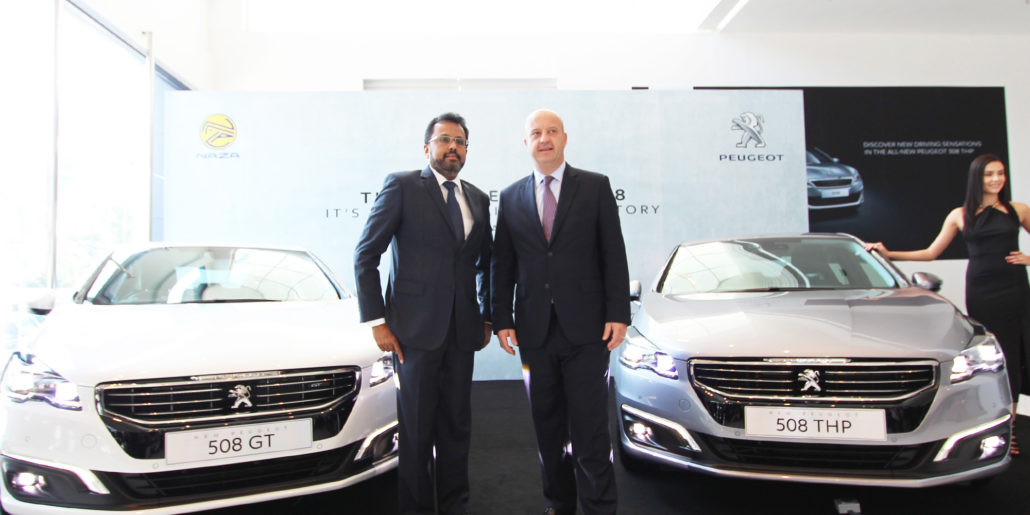 The New Peugeot 508 builds on the qualities intrinsically woven into its DNA: its styling, the range and modernity of its features and its dynamic performance.

“To date, the 508 makes up 16% of this year’s total sales, the second highest behind the 208. With the road as its territory, the New 508 is set to up the ante in the highly competitive D-segment with cutting-edge styling, innovative technology, leading efficiency and dynamic driveability and safety,” said Dato’ Samson Anand George, Chief Operating Officer of Nasim.

He said the New 508 will contribute significantly to Nasim’s sales target of 6,000 units in 2015. “As at April 2015, Peugeot’s market share among European cars is 15%. Not only does Malaysia dominate the ASEAN auto market but our Peugeot ASEAN market share is 71.4%, the biggest in ASEAN.”

Signalling a major evolution from previous incarnations, the New 508 both honours and reinforces its legacy with a more assertive style that is also contemporary. The exterior design is more structured with a new vertically oriented front grille featuring the famous Peugeot lion in the middle, plus a revamped, more horizontal bonnet. Meanwhile, the redesigned bumpers at the rear add a more substantial feel. Brimming over with vigour and style, this new look is set to turn heads wherever it goes.

Completely redesigned to deliver extra power and personality, the front end of the New 508 features Peugeot’s signature headlamps lighting accentuated by full LED technology, giving the car a more expressive appearance. This is especially prevalent in the LED Daytime Running Lights and LED Fog lamp with cornering assist. The signature LED rear lights are just as impressive, creating the effect of three ‘claws’ of the Peugeot lion on the newly designed rear bumper, which stamp their authority on this new model. This high strength steel-enforced body sits atop 18-inch lightweight alloy rims.

The interior has undergone a revitalisation as well. The dashboard’s crowning glory is a World in Peugeot 7-inch HD multifunction touchscreen grouping together most of the vehicles functionalities in an intuitive way. This includes navigation, telephone, vehicle configuration, multimedia, integrated reverse camera, driving aids and digital connectivity comprising Bluetooth, USB, CD/MP3 player, premium JBL HIFI 10 speakers with subwoofer, Arkarmys 3D sound processor and Peugeot Jukebox. Positioned in front of the driver, the ultra-complete instrument panel is backed up by the Head-Up Display with driving and navigation information in colour. The quality of materials used immediately place the interior of the New 508 in a world that is modern and refined.

There are also exclusivities found only in the SW THP and GT variants. For instance, the SWP THP is the only variant to come with a motorised tailgate and a panoramic glass roof with an electric shutter system and one-touch rotary control. The GT is the only variant to come with 19-inch lightweight alloy rims, premium Nappa leather upholstery and memory and massage function in the driver’s seat.

The New 508 comes affixed with six airbags and an Electronic Stability Program (ESP) featuring Anti-Lock Braking System (ABS), Electronic Brake Distribution (EBD), Emergency Brake Assist (EBA), Anti-Skid Regulation (ASR) and Dynamic Stability Control (DSC). Other safety features include Hill Start Assist, two sets of ISOFIX points at the rear for child seats, one touch power windows with anti-pinch and Peugeot Rolling Code Transponder immobilizer security with perimetric, volumetric and anti-tilt alarm. One unique addition is the Blind Spot Information System (BLISS) which warns the driver of the presence of another vehicle in the blind spot angle of their vehicle. As a result, the New 508 achieved a full five-star rating from EURO NCAP.

Both the handling and acoustics of the New 508 bear testimony to Peugeot’s expertise when it comes to driving performance.

The THP and SW THP variants of the New 508 are equipped with a 1.6-litre twin scroll turbo high pressure (THP) engine that produces 165 PS and 240 Nm of torque. The fuel efficiency of the New 508 on a combined cycle is rated at 7.1-litres per 100 km, providing superior fuel economy. This powerful engine was a firm winner at the International Engine of the Year Awards for 8 years running.